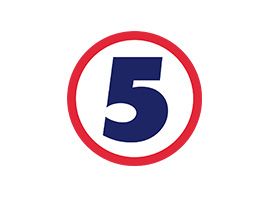 Kanal 5 has positioned itself as a pure entertainment channel for young adults the last few years. They offer popular comedy and drama series, reality shows, infotainment documentaries as well as movies and own productions.

They broadcast from London, UK where they have their headquarters, and keep a Swedish office in Stockholm city.

Kanal 5 (Channel 5) is a Swedish commercial television channel established in 1989. It is owned by the media corporation SBS Discovery Media, changing its ownership from ProSiebenSat.1 Media in April 2013

On 8 March 1989, businessman Matts Carlgren announced that he intended to start a new commercial television channel, as Jan Stenbeck had done with TV3. The channel was called Nordic Channel and launched on 27 March 1989.

The Swedish version of Big Brother was launched in 2000 and ran for six seasons. Kanal 5 also had the rights for the American sitcom Friends. The last episode was broadcast on 15 December 2004, and attracted 965,000 viewers, one of the highest rated programmes in the channel´s history.