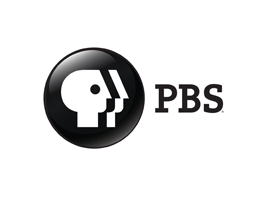 The Public Broadcasting Service (PBS) is an American public broadcaster and television program distributor. Headquartered in Arlington, Virginia, PBS is an independently operated non-profit organization and is the most prominent provider of television programs to public television stations in the United States, distributing series such as NOVA, Sesame Street, PBS NewsHour, Masterpiece, Nature, American Masters, Frontline, and Antiques Roadshow.

Since the mid-2000s Roper polls commissioned by PBS have consistently placed the service as the most-trusted national institution in the United States. However, PBS is not responsible for all programming carried on public television stations, a large proportion of which (including most specials aired during multi-annually pledge drives) come from third-party sources, including member stations (such as WGBH, WETA-TV, WNET, WTTW National Productions), American Public Television and independent producers. This distinction is a frequent source of viewer confusion.

The service has more than 350 member television stations, many owned by educational institutions or non-profit groups affiliated with a local public school district, collegiate educational institution or by state government-owned or -related entities. It also operates National Datacast (NDI), a subsidiary which offers datacasting services via member stations, and provides additional revenue for PBS and its member stations.

Unlike the five major commercial broadcast television networks in the United States, ABC, CBS, NBC, Fox and The CW ? which compensate their affiliate stations to carry their programs ? PBS is not a network but a program distributor that provides television content and related services to its member stations. Each station is charged with the responsibility of programming local content (often news, interview, cultural and public affairs programs) for their individual market or state that supplements content provided by PBS and other public television distributors.

Watch PBS from abroad with VPN