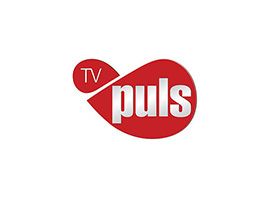 TV Puls is a Polish commercial television channel, which was based on Telewizja Niepokalanów with the support of companies such as PKN Orlen, KGHM Polska Mied?, PZU ?ycie, Prokom and which started broadcasting in March 2001. Due to financial problems, ended broadcasting on April 1, 2003. With the help of a private company Antena 1 and of the owner of Polsat, Zygmunt Solorz-?ak, TV Puls in June 2003 has resumed broadcasting. Until recently, the station´s programming was largely devoted to Catholic issues, as the majority of the company´s stock was owned by the Franciscan Order.

In 2007 News Corporation acquired 35% of the stock and began a major overhaul of the programming. The revised channel, with a new logo and a more mainstream target group launched on October 28, 2007. On the same day TV Puls began broadcasting a new information program - "Puls Raport". But on July 16, 2008 it was decided to remove the program from the schedule. The reason for this decision was the poor audience share results and the excessively high costs of production. On November 3, 2008, it was announced that News Corporation has sold its 35% stake to the remaining shareholders.

Currently, the channel develops. It gives a lot of entertainment programs, series and documentaries. TV Puls in June 2010 received a license to broadcast channel for children and young people Puls 2 (launched on July 19, 2012).