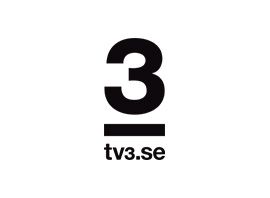 The channel is offered through tv providers like ComHem, Boxer and ViaSat.

TV3 is a television channel targeted at a Swedish language audience and owned by Viasat (MTG). It was founded on 31 December 1987 by entrepreneur Jan Stenbeck as a joint Scandinavian channel, but Denmark soon got its own version of TV3. In the early 1990s, Sweden and Norway also separated.

It was one of the first channels on the Astra 1A satellite. However, in the cities and towns Swedish TV3 become available through cable television networks. Today the channel is available via satellite (DVB-S/S2 through the owner MTG´s Viasat and also at competing Canal Digital, terrestrial (DVB-T/T2) and cable (analogue and DVB-C). Despite being a channel with commercial breaks in all programs, the channel today lacks news and live broadcasting and no longer has home-made productions. However, it is still not a free-to-air channel. Via the analogue cable networks the channel is almost free of charge and is usually included with around 15 channels for a very low monthly fee.

The programming output was mixed with several types of programs. However, in 2006, it became a channel for pure entertainment only, and dropped all daily news.