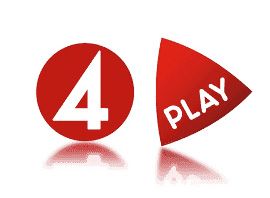 TV4 is a Swedish television network. It started broadcasting by satellite in 1990 and, since 1992, on the terrestrial network. In 1994, TV4 became the largest channel and remained so for a number of years. The two channels of Sveriges Television (SVT) lost more and more viewers for a couple of years. But after making schedule changes in 2001, SVT1 had practically the same numbers of viewers as TV4. Since 2004 the TV4 Group has been a fully active member of the European Broadcasting Union.

TV4 Play is the brand used for the video on demand service offered by the TV4 Group (Sweden), more specifically to the streaming services offered on the TV4 Play website, www.tv4play.se